Sometimes while trying to make the hotspot in windows 7 or windows 8 everything goes fine except the part when one tries to start the hosted network using the command “netsh wlan start hostednetwork“, I previously wrote a guide on how to make a hotspot for sharing your internet connection in windows 8 or windows 7; many people are having the problem for starting the hotspot using the start command in cmd and are getting errors like “The hostednetwork could not be started“. There is some other error reported as well, telling users that Wi-Fi authentication didn’t happen which has been covered here.

Error “Hosted Network Could not be Started” while trying to start hosted wlan network:

Following error can occur in CMD when one tries to start the wlan hostednetwork. If you got any one of those then the solution for such kind of errors has been posted below in the second heading.

The hosted network couldn’t be started The group or resource is not in the correct state to perform the request operation.

The above errors can easily be resolved using the following solution.

There is a pretty straight forward solution for this problem. This happens because of the adapter when it is in the sleep mode, also it can be an uninvited problem which can easily be resolved by uninstalling the adapter and then reinstalling it. 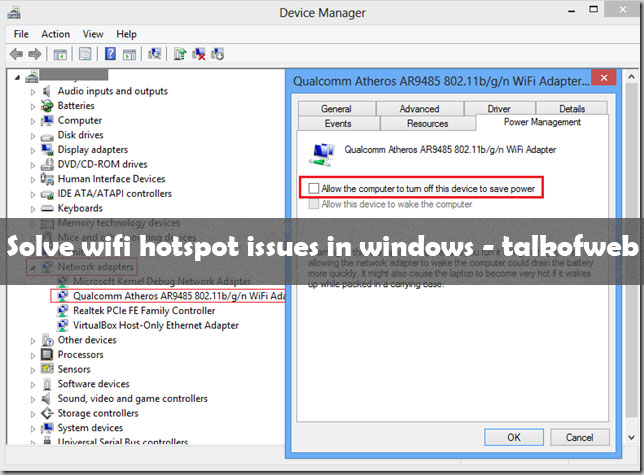 Second solution to resolve “The hosted network could not be started”:

Click on the button “Scan for hardware changes” and it will reinstall your driver for the wifi adapter.

After the wifi adapter has been uninstalled and reinstalled now again start the wlan hosted network or the wifi hotspot using the command “netsh wlan start hostednetwork” this time it will start.

Some users reported us an issue of Wi-Fi authentication problem, this can be solved. Make sure you read this article.