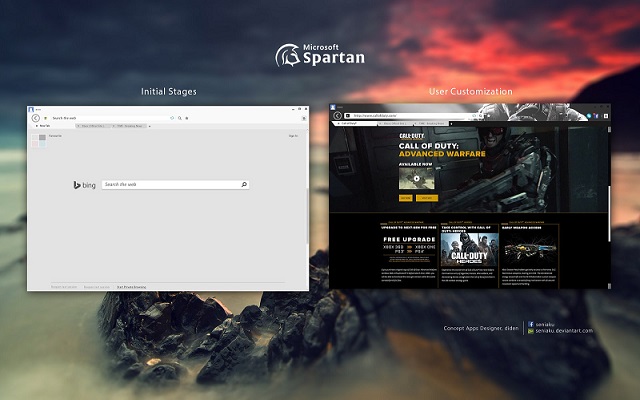 Microsoft has ultimately decided to get rid of the IE brand altogether (not exactly) and to usher in a new Windows 10 OS; they have renamed and envisioned it as Spartan browser. There has been a lot of rumors about features and changes in the new browser, but yesterday, Microsoft officially launched Spartan browser with a preview for the world.

Microsoft announced its latest iteration of OS, the Microsoft Windows 10 last year. The first Microsoft Windows (Windows 1.0) was released way back in 1985. It wasn’t a complete OS but rather an extension of MS-DOS. Windows first ever browser, Internet Explorer, came bundled with the Windows 95 version in 1995. The later versions of Internet explorer were always available as free downloads and also came with OEM versions. Up till now, 11 versions of Internet explorer have been released. Internet Explorer has also been made into a special version for Mobile and Console platforms.

Since the beginning, the Internet explorer has always been frowned upon by the user community. Internet explorer has been a frustrating experience, to say the least. Microsoft hasn’t been able to address user concerns, and the browser has always been buggy with lots of security issues present even in latest versions. Even though, Windows platform remained the operating systems in a great majority of the PCs, it faced competition from Mozilla’s Firefox and later on Google’s Chrome browser that is now the most used one. With a great increase in mobile device users and subsequent decrease in PC users, Microsoft had been hit hard, and the IE was being seen as a necessary evil of buying Windows OS that anything else. Microsoft old CEO Steve Balmer did try to revive the IE but nothing good has come of it till now.

“Spartan” is not supposed to replace the classic Internet Explorer, but to remain a viable and refreshing option for Windows 10 users should they desire it. Unfortunately, Spartan is not available for the next preview build of Windows 10 and also it still is unclear when it will be available for developers and testers. Spartan is going to be a downloadable app, which has become the trend these days. Part of the reason would be to lure more customers to Windows store, and part will be to be better able to provide updates. 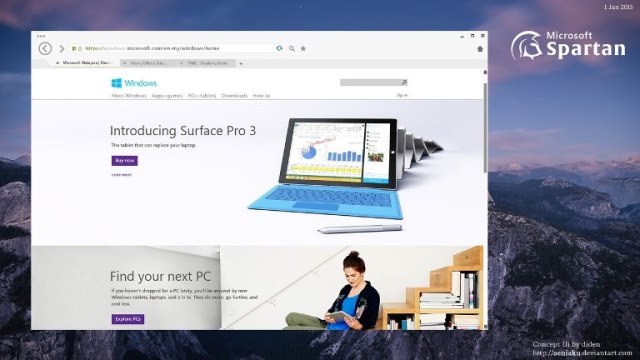 Of course, building a new browser from the scratch is difficult, and we don’t expect Spartan to not include IE features. But surprisingly, only rendering and JavaScript engines remain same as IE but not much else.

The UI for Spartan browser is still not decided and from a design point of view, it can still be a lot changed once the final version for customers is released. It does seem that Microsoft is trying to go for feel and look of Chrome browser. This is understandable since StarCounter puts Chrome on top of web browser ecosystem, and obviously anything that is close to its design will be attractive. But, all in all, we can assume Spartan to be a lightweight and simple no fuss browser.

Spartan browser is set to include a built-in PDF viewer, a special reading mode and will also include the feature of reading lists.

Unlike the Internet Explorer, Spartan is all set to support browser extensions. The much-awaited extensions and add-ons will pretty much work in the same way as that of Chrome and Firefox.

You might have heard of Cortana, Microsoft’s voice assistant answer to Apple’s Siri for mobile devices. While Windows Phone might not be doing so well and so is Cortana on it, Microsoft has decided to put Cortana into Windows 10 and Spartan. You can use Cortana in Spartan to go to email or make reservations, etc. It can also display additional information while browsing on websites. Overall, it is there to improve your browsing experience.

These days, with RAMs reaching normally into 4GB reach for even low-end computers, you can enjoy opening lots of tabs on your browsers without worry of running out of RAM. This can create a lot of clutter and disorganizations. Spartan introduces a new feature to solve this called “grouped tabs”. One can organize tabs into Home, News, and Work, etc. i.e. whatever you want.

The Spartan browser will also be providing “Digital inking support” i.e. ability to use styluses on the browsers. Microsoft also sells styluses for its tablets, and this appears to be the right move business wise. You will be able to create annotations and notes that can be stored on Microsoft One drive, draw on your webpages, etc..

These were some of the details that came from the Microsoft Conference yesterday. We will keep updated with any new info on Spartan and make it available to you over the course of time.