Ok Google is something termed as Siri for Android making android your virtual personal assistant. AI-induced learning can bring more to the future of the personal assistants. Imagine the innovation which we came across to innovate our way towards commands like “Ok Google” and letting our phone understand what we want to do with just out voice. Some smartphones are even capable of waking up with voice commands. This article explores Ok Google in more detail which is a personal Android assistant. If you are not familiar with Ok Google, then better install Google Now.

20+ amazing things which you can do by just saying “Ok Google”:

Imagine having an alarm with just a voice command, getting directions to a new food place with a single voice command and setting up an event while speaking to your smartphone. This is all innovative and quite new to old people. However, I’m happy to say that this is now possible with Google Now and you only need to say “Ok Google”.

There are certain commands which are country specific and I’ll try my best to point them out, but again the users are the resource who can test commands and let me know in the comments section.

This is one of the most basic functionality which almost all the android virtual mobile assistants offer. Making voice calls and sending text messages is a need when your hands are busy. I use Okay Google to do these things, while I’m unable to type or scroll through contacts. 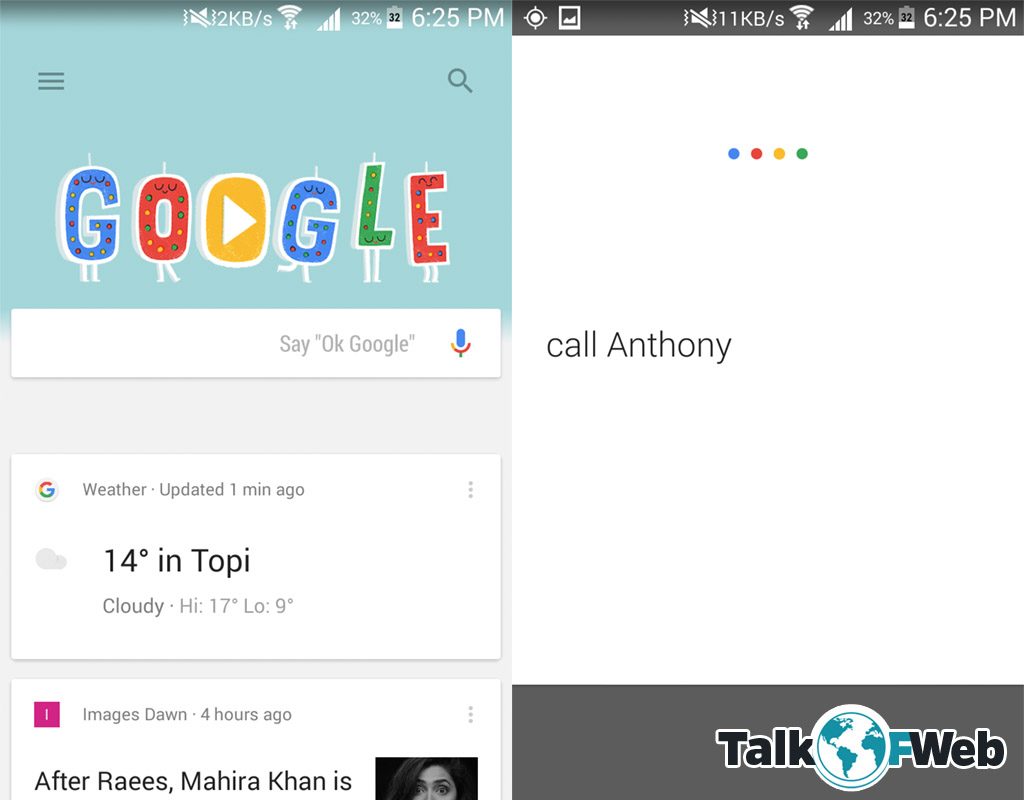 What I did was to launch google by saying “Ok Google” at home screen of my Google’s Launcher. After that it was listening to me, I simply said “Call Anthony” to Google and it interpreted the command and made the call.

In the same way, you can send a text message to your friend. Simply say “Ok Google” and say “Text Antony” and it will ask what do you want to send? Just speak your message and it will even type your message for you after that just tell it to send the message. Even it was able to understand the Indian and Pakistani Muslim names which are local other than USA ones. This is a great achievement, now I don’t know if Ok Google can also wake up smartphone because, in my note 2, this wasn’t the case.

2 Don’t get lost anywhere in the world – Get Directions:

If you are driving in a new place then chances are that you might find it difficult to get directions. Even sometimes in worry, a person isn’t able to drive and use a smartphone at the same time, but happily “Ok Google” command will not only save you directions and time but will also provide you ease. Launch google by just saying “Ok Google” or simply launching the google application. Now you’ve various different ways to get the direction. Some being “directions to“, “Take me to” and “How to get to” and saying the place name afterwards. You ask a natural question and in the end, google will be happy to assist you by opening up the map application. The map application will even ask you, favourite route and based on your on-screen observation just answer, and there you are ready to be taken to a new destination.

My query was “Show me the nearest restaurants” and Google was able to show me very accurate results. 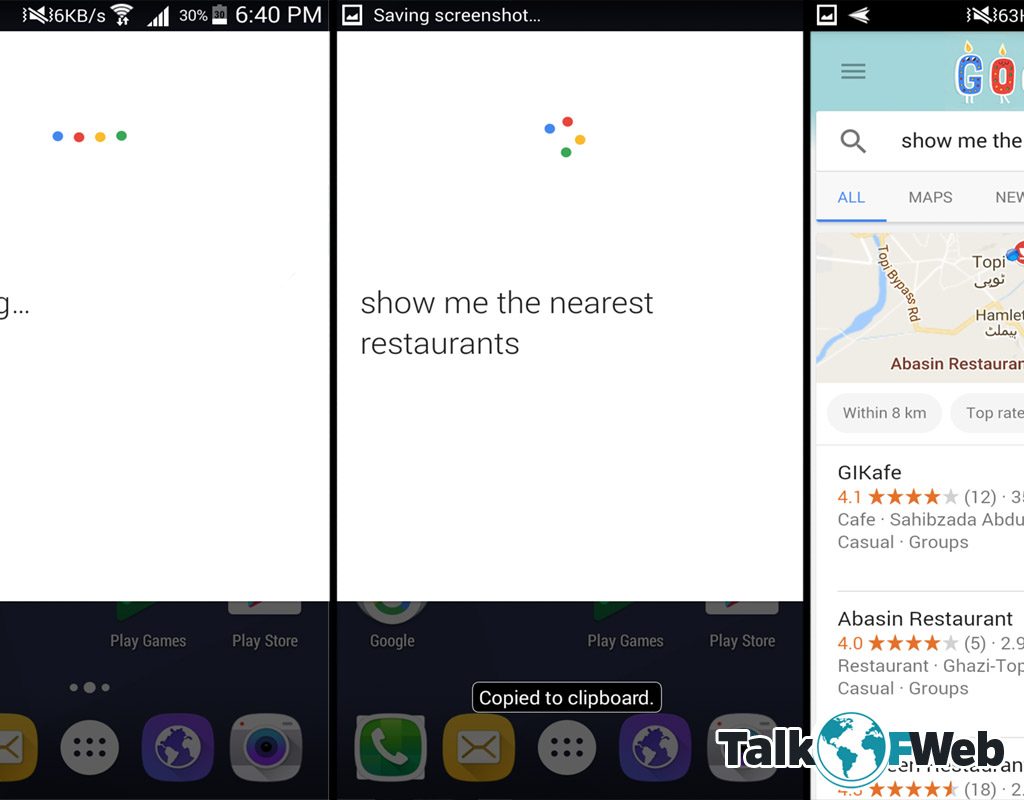 Now suppose you have a byke or you are on feet, then you need to say “Walking Directions To Place” and to your excitement, the Ok Google will be able to give you perfect results, showing you the best of walking or cycling path. You can even ask Ok Google “Where Am I” to get your own location. You can view a map of a specific location too by simply giving Ok Google a command of “Map of this place“.

3 Setting up Reminders and Adding events through Ok Google:

The cool feature which is awesome for lazy people like me, I am often not in the mood to search for the alarm application and then set the alarm with scrolling the time blocks. I simply say Ok Google at the home screen while I’ve also 3G access on my phone, and ask it “Wake me up at 4 am” and consider the task done. Similarly, you can set reminders while saying “Remind me to wash my car this Saturday” and it will remind you on Saturday to wash your car.

You can also put place based reminders, like “Remind me to wash hands once I reach Home“, the thing is that your home location must be set in Google maps, and if that isn’t set then even Ok Google can’t pretty much help. 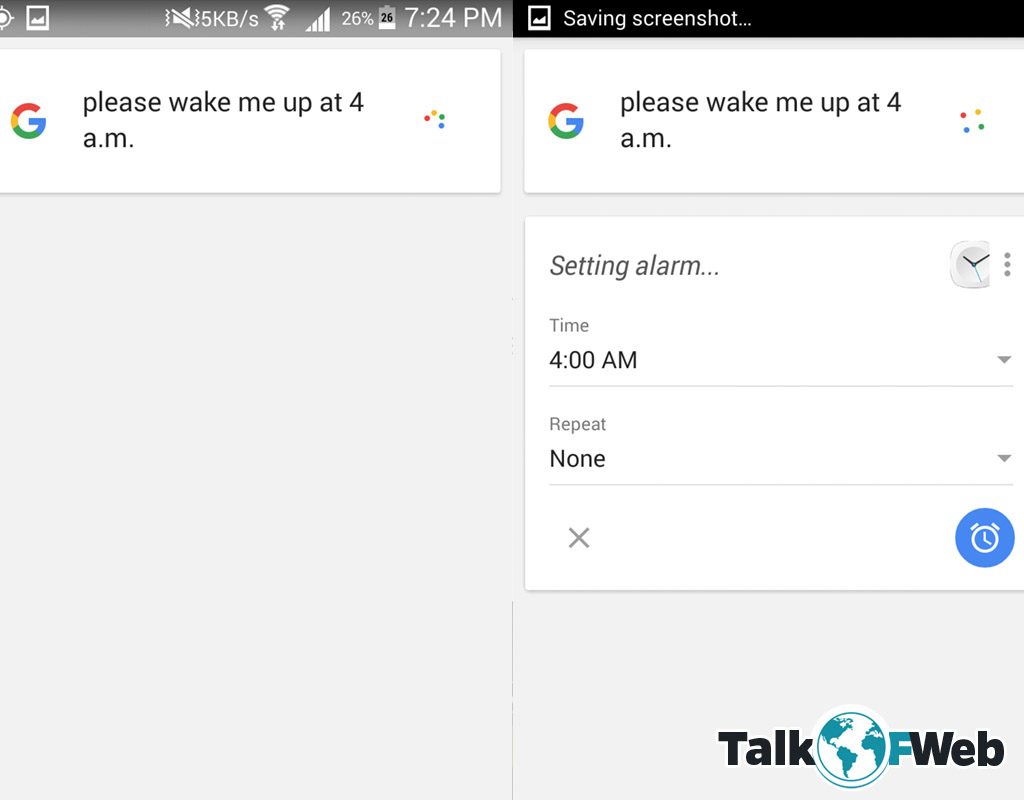 The good part, you can even send emails using the commands of Ok Google. Not even the emails portion gets covered, but you can also communicate over social media without doing any hand operation. You can control your social media messages with Ok Google.

You just need to say Ok Google at your home screen and after that say “Send Email“. This will initiate the email within the Google Application. Now you can manually type the subject and the message. However, if you want to go further out of the box then just say “Send Email to someone subject Macbook pro message I have a problem with my laptop” and that’s it. The Google will understand the subject from the whole command as well as the message. 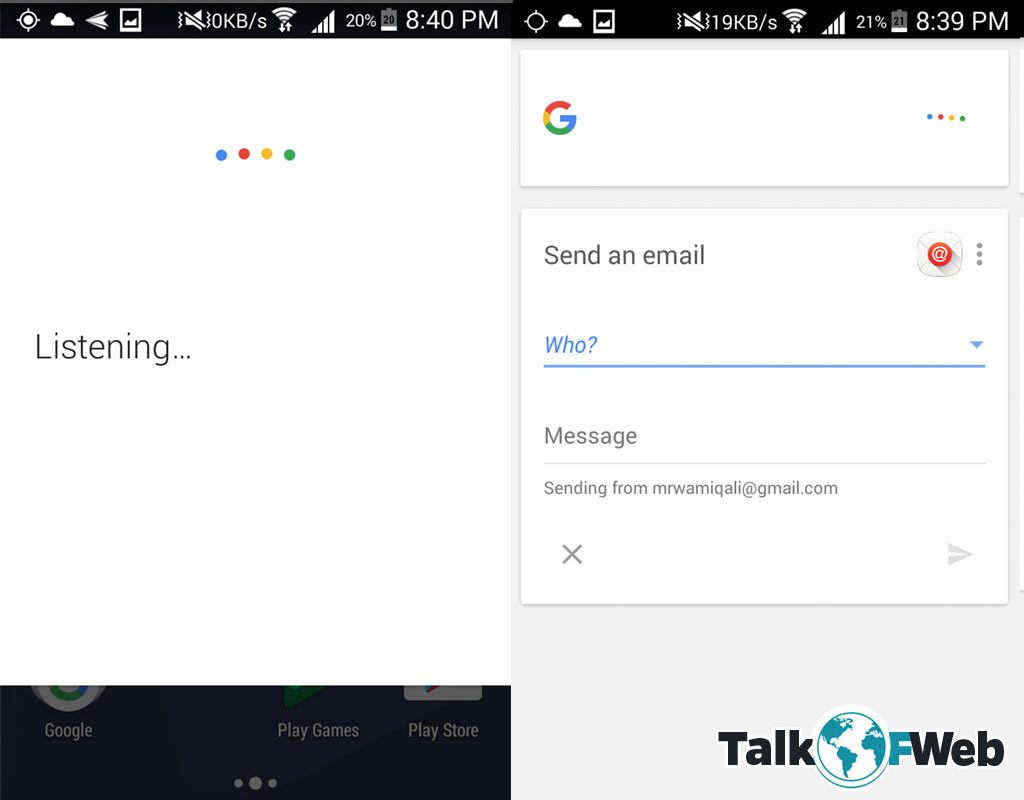 You can also post to Google+ with ease through Ok Google command. Just say “Post to Google Plus” following the lines which you want to post on google plus.

It’s quite easy to navigate with Ok Google. Well, the search function of app drawer was not sufficient, now we also want to skip the typing part. I don’t want to type the application name in the search field. What I did was, saying Ok Google at home screen of my Google’s Launcher. The Google was then listening to me, and then I said “Open Chrome“. This launched the chrome browser.

I can also open any website directly from the Ok google command. What I need to do is to say “Open TalkOfWeb.com“. This will open the website for me. 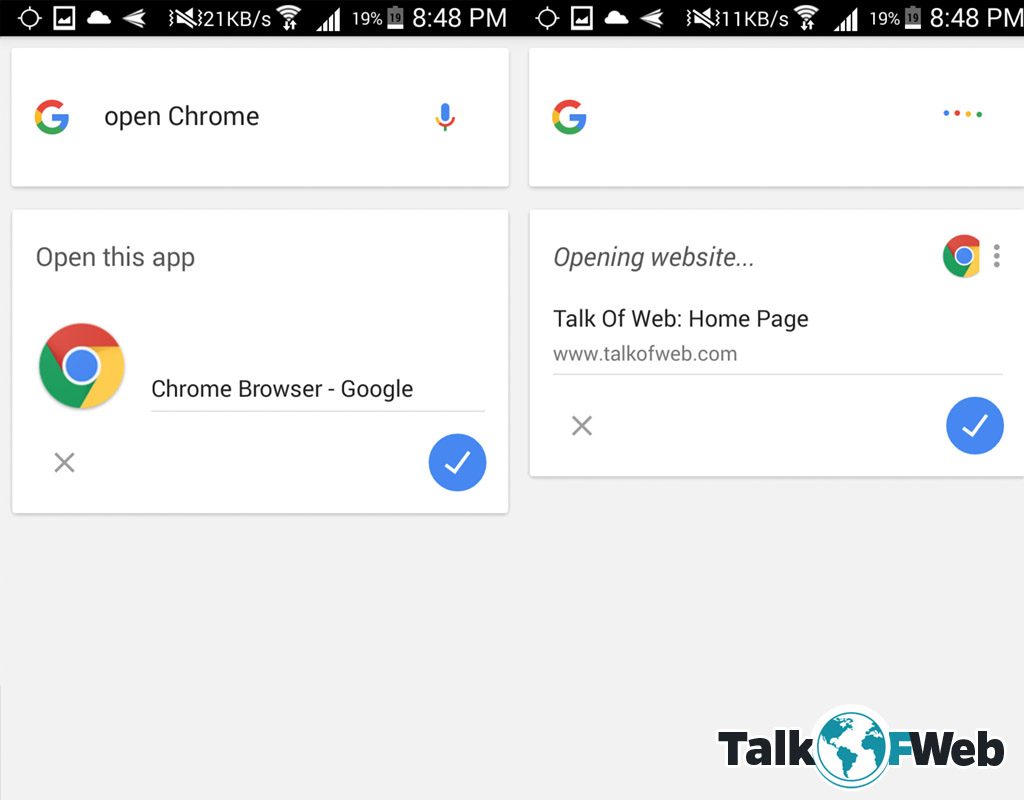 6 Having general enquiries with Ok Google:

What good is a personal assistant if it’s not able to answer your questions? Ok Google focuses on same thing and answers almost any of your query. Well, it can answer questions ranging from mathematics to advance science and facts. Obviously, it has all the internet and it can fetch some pretty amazing results. You can ask “What is the status of delta 238?” also things like “What is my next event?” … Amazing … things which you can do with Ok Google. You must also consider trying new things like “What is 1 times 48?” pretty obvious but you must test everything. 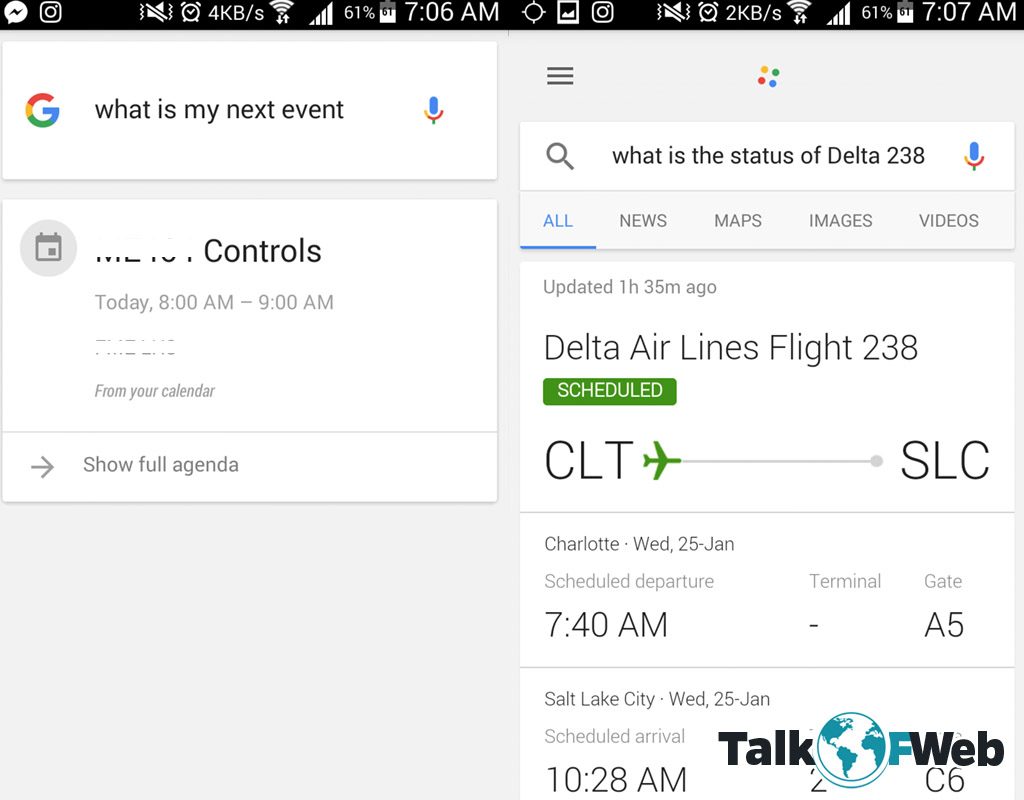 You can fire up images and google search too, you can ask anything like birth dates of famous people. You can ask the Ok Google to help you find some pictures of amazing interior furniture.

What good is a smart assistant which is not good at TV programs and Music? This is one quality which is quite a role player in your friend choosing habit. If you are watching TV and want to know some interesting facts about the TV show being played then simply launch Ok Google and then say “Listen to TV” so it will start listening, recognise the show and show you some amazing cards on facts.

Similarly, you can play Hound through Ok Google command, simply say “Listen to Music” and it will start to listen, then will show you which song was being played. You can also ask “Ok Google, play some songs“, the whole entertainment features might vary from location to location.

Your local TV shows might not be a good option to ask from Ok Google, if you aren’t a US resident, but still give it a try.