Social networks now mean a lot to us and more important are the devices which make us to use them. Windows 8 is now a consumer priority since it is fast and more better than the previous windows versions. Windows 8 at the tablet and laptop offers us a application store and the traditional start menu has just vanished. I tried a twitter client for the windows 8 and that seem much better than the Facebook one’s (I guess Facebook app. is developed by third party developers). What is good in this twitter client for windows 8? I am going to tell you now!

This client is really fast, responsive and got a good UI which really makes me feel comfortable with it while using an ultrabook as it never spoils the beauty of my machine. Since it is developed by the twitter itself so the UI just matches with the whole website layout and color scheme. 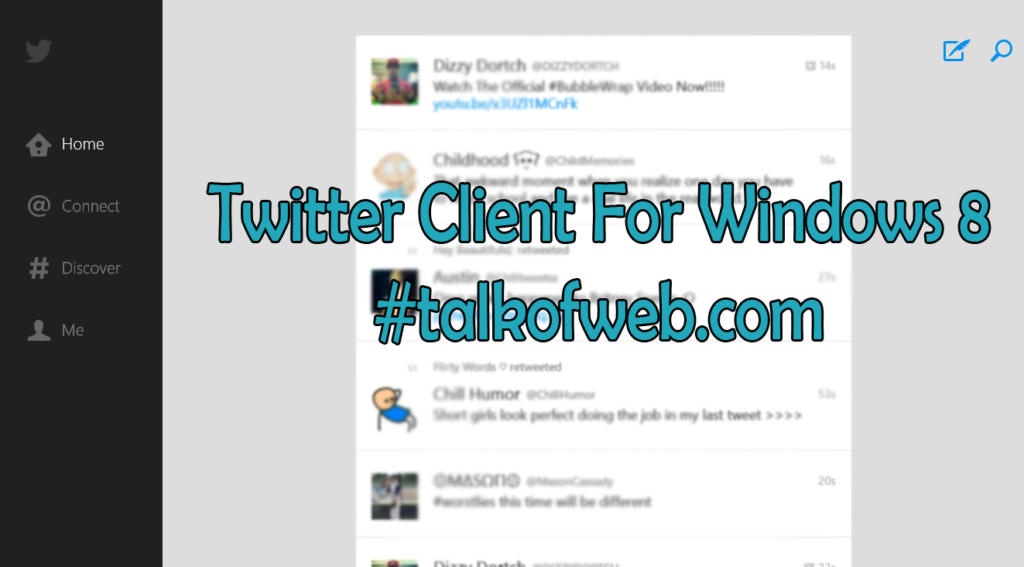 On the top right side you got the button to compose and write tweets. At the same time you got links to your connect tab, discovery tab and profile tab, termed as me at twitter. The whole ui is in the flow and afterall you get the latest tweets at the home timeline. You can retweet and can reply to any tweets instantly. Next thing is this that while using windows you can just switch between twitter client and any other application with quite an ease using the Alt+Tab (Switch windows shortcut) also if you take your mouse to the top left corner of the screen then also you can easily switch to the twitter client even while using the windows. 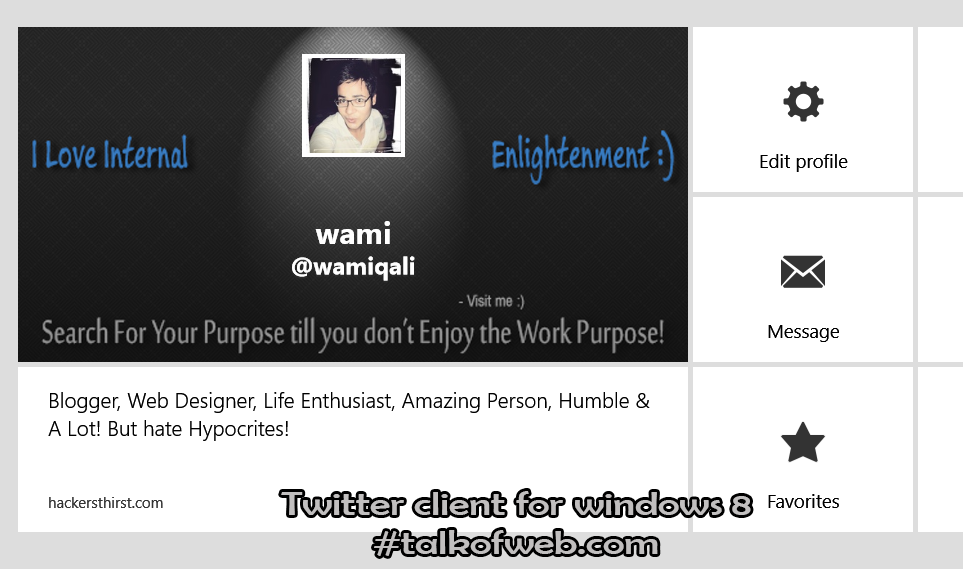 Above you can see the profile area in the twitter client where I can see followers, people I follow and my direct messages. Also I can slide the lower bar to see my recenet photos and my recent tweets. Sliding up the right side bar makes the twitter client update the tweets or mentions. Also it shows mentions and new followers in the row form in a symmetry so one may not get confused. Like if number of people followed me then I can follow them back by simply going to mentions and then clicking on the follow row and then there opens a row of persons who followed me, with a button to follow them back.

You can receive Direct Notifications on Desktop with Twitter client for windows 8:

Yes, it is possible and a notification for a new followers, a retweet and a favourtie will not make you miss another update. You will be on time while responding to your followers and even to those who actually matter. It is good for a person like me who often finds no time to open the twitter again and again instead he finds it good to get notified for any new activity happened at twitter. A new DM received and you are going to get the notification for that at your desktop.

Just go to the store from the start menu of window 8 and then search over there “Twitter” and install the application which has been developed by twitter inc. also if you don’t know how to search for the applications then kindly take your mouse to the right corner while running the store and then go to search and write there the twitter.

It’s a good client and you should give it a try. Worthy enough to be used. Also share your views bout this client for twitter once you use it.